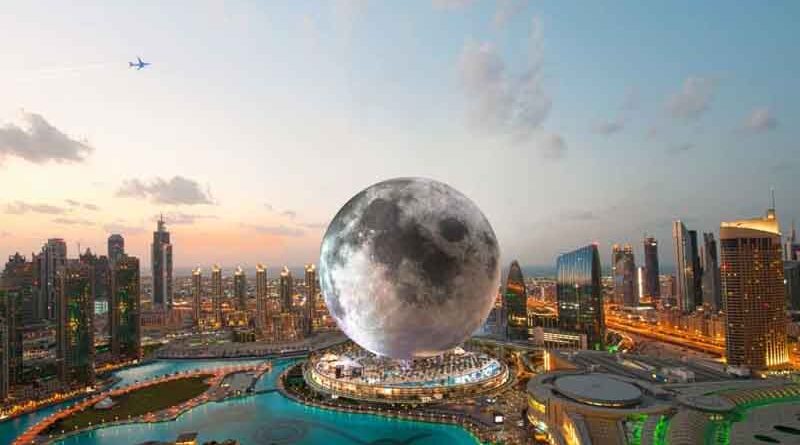 If the proposal is authorized, Dubai will be a pioneer in space tourism.

The largest and most prosperous modern tourism project in the entire MENA region will be Moon Dubai. Based on its global appeal, brand awareness, and distinctive numerous integrated offers, Dubai’s annual tourism visitations are expected to double, according to Mathews and Henderson of Moon World Resorts, who also noted that the city “can comfortably absorb 10 million yearly visitors.”

The Dhs18 billion Moon Dubai resort could soon be located in Dubai, making it the largest tourist attraction in the Middle East.

Moon World Resorts Inc. has made proposals for the massive project, which is intended to sound and look exactly as it does.

Moon Dubai is a resort unlike any other, complete with a spa, nightclub, events center, luxury residences, a “moon shuttle,” and training services for international space agencies and astronauts.


Not to add that it resembles the moon, complete with a massive sphere and a “lunar colony” around its “lunar surface.”

This lunar surface is intended to receive 2.5 million guests who will partake in space tourism, all from Dubai.

The location would be constructed in about 48 months and have an overall height of 224 metres.

If Moon Dubai is successful in its current architectural design, it will be able to host 10 million tourists yearly.

It would aim to establish Dubai as a centre for reasonably priced space tourism through collaborations with space agencies.

Sandra G. Matthews and Michael R. Henderson are the minds behind the idea, which is currently in the design phase.

The two are going to set off on a roadshow in 2023 with the goal of introducing Moon to potential licensees around the Middle East. Dubai is one of the target cities, along with those in KSA, Qatar, Bahrain, and Kuwait.

Four Moon resorts in all, one in each of North America, Europe, the Middle East and Asia, are being sought after by Moon World Resorts Inc.